On Monday, I attended a  family court hearing at London’s Central Family Court – in very general terms, it was a private law dispute about contact with children, of which many thousands are  heard up and down the land every day. It was a hybrid hearing, which means that some people are in court, and others attend remotely.

In this case, the judge and two counsel were in court. The expert giving evidence was remote. On that day, the parties, the Guardian, and counsel for the Guardian were also logged in from home, as was I. I think there was also a local authority social worker logged in remotely.

At the start of the hearing, the judge, HHJ Brasse, asked me why I wanted to attend this particular hearing. It was asked in a perfectly friendly way, but it is not a question I think a judge should ask, and I’ll come back to this in a second blog.

She welcomed me to the hearing, and made it clear to all parties including me that I could not report the detail of the case without making an application to the court – she had clearly anticipated that this was something I might want to do. That is always welcome, because it means in my experience, it means it’s likely a judge will ask at the end of a day’s hearing if there is anything the media might want to raise. This is really helpful, as it is nervewracking – whether in physical court or remote court – to raise your hand and go ‘ahem, excuse me judge’ when everyone is briskly packing up for the day.

Anyway, I was only able to attend 90 minutes or so of the hearing on Monday. I tweeted as follows that same evening: 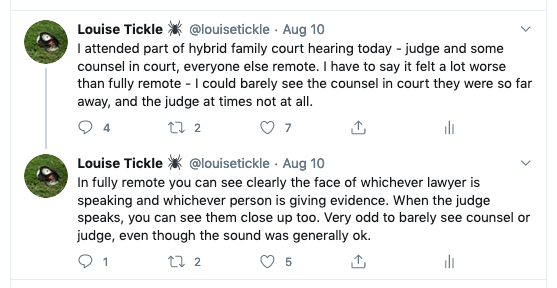 (This is not a post about the merits or otherwise of different types of hearing, but I point out that family barrister Lucy Reed, responded to my tweet agreeing, while pointing out that for parties themselves, it is sometimes their preference to be able to give evidence, in person, in front of the judge. Clearly this is a very important reason for attempting to ensure fair process in a way that works for the people who are most directly affected in a case).

As you will see in the tweets, there is no reference at all even to the general gist of the case I was attending.  Case law has confirmed that I am permitted, even within the constraints of S12 AJA and S97 Children Act, to give a broad outline of the matters being considered in a private family court hearing. What I am not allowed to do is go into any detail. In fact, I hadn’t done either.

On Wednesday, I had time to attend again (this is all unpaid, uncommissioned, and with very little likelihood of ever being able to publish much if anything about the case, but I’m interested in family court cases, so attending is something I try to do, when I can; especially during the pandemic, it feels important to me that the media’s watchdog role is made use of, when state powers are being exercised remotely, and there has been so much concern about the fairness of hearings, and attempts to work them better in the interests of all parties). Before the case got underway, the judge said hello to everyone, noting that I was present again, and said something along the lines of ‘shall we get on’.

The following narrative is what I have just sought and gained permission to publish – though I feel it is ridiculous that the way the law is framed requires me to do so in order not to risk being in criminal contempt (everyone who knows about S12 AJA thinks it is very poorly drafted, and this unfortunately, is the result).

I felt astonished. What I had done was completely within the law, and entirely unremarkable. What on earth was he playing at, I wondered?

Given the way this matter had been raised, the judge, I think  perfectly understandably, did indeed express her surprise and dismay that such a thing should have happened when she had made it clear at the hearing on Monday that I would need to make an application to report on the case. She then invited me to respond.

As you can imagine, I was pretty cross.

I explained that I had tweeted no detail at all about the case, but had simply commented on Twitter that having now observed a hybrid hearing earlier on that day, and comparing it with fully remote, I felt that hybrid was considerably worse.

I also said I was frustrated and angry at the suspicion I meet with regularly from counsel, to the point that my tweets are now being monitored, and points are raised about entirely innocuous reporting that might give alarm to a judge, without explaining the content of what I had said.

I pointed out that the law permits me, in any case, to report the general gist of any private family law case without special permission, but simply not the detail.

I made the point that I was not at all happy that the fact I had simply tweeted about the hybrid nature of the way the hearing was being conducted had been raised in such a way as to make the judge feel – in that moment – concerned.

And then I drew breath and thought I should probably stop .

The judge immediately said that now she understood what the tweets contained she was not concerned about them.

Giles Bain then protested that he had simply raised with the judge that I had tweeted about the case, and his comments had gone no further. I should clarify here that in this morning’s hearing, he said that in raising the fact of the tweets, he had specified that he took no issue with their content. I don’t recall him saying this. If I had heard this, I think I might have been less indignant at the time. But I may be misremembering. And I should also note that it is also perfectly possible that he raised the issue of the tweets on instruction.

Back to the hearing on Wednesday:  having thought I’d said all I needed to say, I now felt I had to pipe up again to pount out that I had not in fact tweeted anything at all about the  case.

The judge reiterated that she was not concerned about the tweets.

It felt like a very sticky start, and unneccessarily so.

Why does this matter – why am I so cross?

It’s just this: I am getting very tired of encountering what feels like passive aggression when I attend family court hearings that the media has been entitled as of right to attend for ELEVEN years.

I think it is unfortunate, to say the least, when entirely lawful and unremarkable reporting is “raised” by counsel with a judge in a such a way that will inevitably cause alarm.

While in this case, nobody sought to exclude me from this hearing, and the judge has continued to clarify that I am welcome in her court, I also observe that my overall experiece is that some people – generally Guardians and local authorities, and certain counsel,  very rarely parties – seem at times to be inherently hostile to a journalist taking up their right to attend.

By raising the fact of the tweets AT ALL, given their entirely lawful content, the barrister seemed to me to be, for some reason, making something out of nothing. What was the point of raising perfectly ordinary, unremarkable reporting, leaving out the content of the tweets which would have made it obvious just how innocuous they had been? In my view, it wasted everyone’s time. Basically, there was nothing to see here.

I should note that in today’s hearing, that I am just out of, where I asked for permission to report what happened, the judge said again that “having seen the tweets, I’m not concerned about their content at all” and further, said that she did not think it was anything to do with the court.

She later said “Mr Bain properly brought them to my attention”.

So I’m a bit confused. If every time a journalist writes or tweets a lawful report about any part of the justice system, and counsel keep bringing it to the attention of the judge, then an awful lot of time is going to be wasted on something that is of zero relevance to the case in hand.

Now to the issue of judges and the questions they ask – will post that this afternoon as I have to scoot.